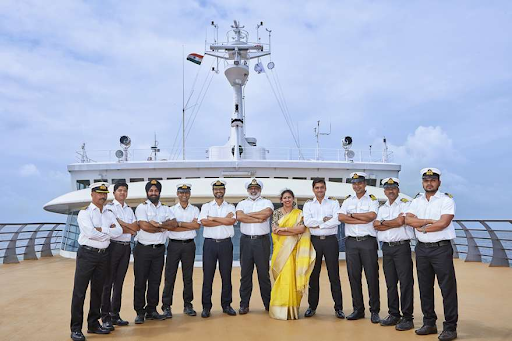 Numerous youth dreams blur into recollections as the matter of genuine step by step denies them of desire.This is not the case for Captain Nitin Dhond, whose own dream began as a child, influenced his choice of career at the age of 16, and was realized at the age of 60.

Two steamers used to ply India’s Konkan coast between Bombay and the former Portuguese colony of Goa. Their cargoes of exotic fruit and household goods mixed with deckloads of passengers picnicking and playing music into the night. Captain Dhond’s imagination was captured by these steamers when he was a young boy.This gave the boy the desire to sail the seas, which led to a distinguished and long career in the Indian merchant navy, where he gained extensive international maritime experience.However, he never lost his memories of the Konkan coast.These steamers were taken over by 1980 and later sent to Sri Lanka as peacekeeping forces.Captain Dhond made the decision to restart the voyage after the service was discontinued.

Leena Prabhu, Captain Dhond’s sister, explains, “He spread the word among the marine fraternity that he was on the lookout for a suitable ship.” Her unstoppable energy has overseen the refit of Angriya and its ongoing operations.A friend was looking over a ship that was 20 years old and being decommissioned in Japan. He thought it would fit Captain Dhond’s needs perfectly.We didn’t want more than 400 people on board, and we also wanted something that would make being at sea more enjoyable for everyone.This ship was well-maintained and used to transport passengers and cargo from mainland Japan to the Ogasawara Islands.Therefore, we and our partners quickly decided to purchase it in December 2016.’

The ship was taken by sea from Japan to Goa, where the necessary paperwork was completed to register it under the Indian flag and work began to transform it into a passenger cruiser.This involved a name change to Angriya, honouring one of India’s unsung heroes, Sarkhel Kanhoji Angre, first admiral of the Maratha Navy who took on colonial maritime powers in the 18th century and never lost a battle.

The beginning of the monsoon forced the ship and its crew to dry dock in Mumbai after three months in Goa.By this time, a lot of metalwork had made three passenger decks, a nightclub in the old storage refrigerator, and several cafes and restaurants, one of which, Ancora, is made to look like the huge anchor from the first ship.Prabhu elaborates, “Captain Dhond had a lot of clarity about how he wanted the ship to look.”It has extremely straight lines which we needed to keep up with.Numerous cruise ships have a large interior design;We wanted the ship to have an outward-facing theme so that people could see the sea, the coastline, and its history.

The company, which also owns and operates the Wildernest Goa eco resort in 800 acres of protected forest, is well-known for its commitment to ecology and conservation, and passengers are educated as they sail.There is information on ancient forts and settlements along the route, and screens in one of the restaurants show nature programs and children’s movies. An on-board ecologist can help identify birds and mammals that are spotted during the voyage. 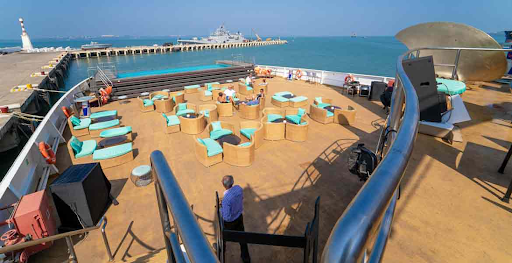 An 18-month fit-out period began upon Angriya’s arrival in Mumbai’s port. It was overseen by the resolute Prabhu, who challenged the port authorities regarding an outdated law that prohibited women from leaving and entering after six o’clock in the evening and won.She describes that time as quite a challenge.On board were close to 200 employees and subcontractors.

One of the workers for hire was AV frameworks mix organization AudioTechnik. A Bose World class accomplice for India, the organization was advanced by the producer after Prabhu communicated an inclination for Bose frameworks all through the boat. The venture was driven by AudioTechnik’s organization pioneer, Rajesh Patil, and two different chiefs, Kevin Pillai and Peeyush Singh.

According to Pillai, “Once the audio installation began, it was easier for us to understand the project’s dynamics and what was required.”When it comes to mounting speakers, the ship has a lot of restrictions, and many protocols that don’t apply on land must be followed.We were completely trusted by management.They not only granted us freedom but also the authority to carry out the necessary actions.We took them to our Mumbai installation, MH04 Drunkyard, a warehouse club, and suggested things they could provide their passengers that would add value, such as a setup for a live band and video solutions. From there, things started to develop.

Prabhu’s master’s degree in Indian classical music and her occasional performances helped.She asserts, “I’m not very technical, but I know the difference between good and bad sound and a little about mics and sound systems.”The vitally acoustical test we gave Audio Technik was that we needed to save the boat’s lines and uncovered metal.’The pool deck, which was created by removing a large mast to create a large space at the ship’s aft with an infinity pool overlooking the wake, hosts much of the ship’s entertainment.This deck’s main system is a pair of weather-resistant, high-output Bose LT 9702 WRs, which handle the many DJs and live bands that play every night.A QSC GXD4 amplifier powers these, and a pair of British Acoustics Delta828 subwoofers with a QSC PLD 4.5 amplifier back them up.The main system makes use of a Bose ControlSpace SP-24 sound processor as well.A Bose PowerShare PS604 amplifier powers two Bose FreeSpace DS 100SE and two FreeSpace 360P speakers for BGM. A single Bose FreeSpace DS 40F flush-mount speaker provides BGM for the Sea Breeze bar, which is located above the pool deck.

Pillai describes the LT 9702 WR system as “powerful and flexible enough to handle different types of music and also endure the extreme conditions.”They have successfully gotten through their first year at sea and the Indian monsoon;Their tonal quality has not changed since we installed them.’

The live bands on the pool deck use a Yamaha MG16XU 16-channel analog mixer, which was chosen for its ease of use by the on-board staff.

One of Audio Technik’s greatest obstacles was the Fathom Lounge nightclub.Pillai explains, “We have turned it into something on the other end of the spectrum – an intimate nightclub.” It used to be a cold storage area.Due to the space’s exposed metal interior and the absence of rigging points, brackets had to be welded onto the steel shell.This made it hard because we couldn’t use acoustic panels. Instead, we had to use something that would fit the place’s aesthetic, so we used acoustic foam treatments on the ceiling and walls everywhere we could.We were ultimately dependent on the crowd and the furniture for the remainder.’ 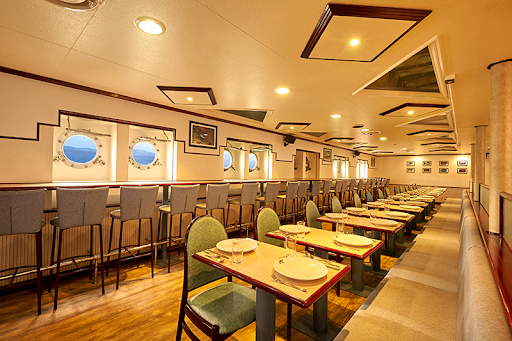 A system of six Bose RoomMatch Utility RMU 208 small-format, two-way speakers and four F1 subwoofers was installed by Audio Technik in 0.6-meter recesses around the dancefloor due to space constraints.“The RMUs behave really well in terms of tonal quality and output levels in a place where space is limited,” Pillai says of the point source system, which utilizes the same Bose EMB2 compression driver for vocal clarity and low distortion as the larger RoomMatch array modules.We could concentrate on specific high-energy areas.We didn’t want the DJ to be surrounded by two large speakers;We wanted it to have a spread out sound, but because it was a nightclub, the energy had to be high.The band played in the Fathom Lounge for the launch party. We were amazed at how well the RMUs handled live sound because they weren’t designed for that.The system handled the proper heavy four-piece band and loud drummer with ease.

Another challenge was that the lounge needed to be quickly converted into a conference facility when required.In order to provide an L-R setup, Audio Technik provided a preset that muted the rear speakers and reduced the amount of feedback from the wireless microphones used.A motorised, 150-inch screen together with an Epson projector can be easily deployed for this change of use.

The Sea Horse bar in Fathom is above the dancefloor. Here, six RMU105 ultra-compact speakers with two F1 subs extend the system, which is powered by a Bose PowerMatch PM8500 amplifier and includes a Behringer 880 mic splitter and a Yamaha MG12XU 12-channel mixer.

The Dry Dock spa and the Ancora and Coral Reef restaurants have utilized additional Bose speakers, FreeSpace DS 16SEs, powered by Bose IZA 190Hz zone amplifiers.On private charters for parties and special events, a portable Bose F1 Model 812 system can be used on other decks and areas as needed.If necessary, Sennheiser’s XSW35, XSW52, and E835S handheld microphones can also be utilized.However, there is also an emphasis on providing quiet areas where guests can listen to the ship at sea and the waves under the stars.

Audio Technik also provided Samsung videowalls for screening films in the Coral Reef restaurant, while all LED light fixtures for the ship – primarily in the lounge and on the pool deck – have been provided by Reynolds Sound and Lighting from Bangalore.

Because the partnership with Audio Technik went so well, the company still helps maintain the ship, book and manage events on board, and consult on future projects.

According to Prabhu, “A captain told me that every ship has a soul and chooses who she has with her – you don’t have a choice.”We quickly realized that Rajesh Patil was taking on a lot more responsibility than just his main activities.He became one of our directors because what he said and the advice he gave made a lot of sense.Additionally, there were unavoidably numerous other events that took place but were within our control;that was the way this ship was put together.There are a lot of people who share Captain Dhond’s dream, and they are all equally enthusiastic about this ship.’

This is clear when speaking with some of the young Goans working on board, who were hired straight from local training institutes and catering colleges and are eager to tell passengers about the ship’s history.Angriya is a rare commercial project that adheres to the integrity and values of its management team, including Captain Dhond’s childhood dream, in addition to meeting all technical and operational requirements.